The country's top experts are called into action. Vassili Nesterenko was one of them.

At the time, he was working on improving the Soviet Union's intercontinental nuclear missiles.

If the heat managed to crack the cement slab, only 1400 kgs of the uranium and graphite mixture would have had to hit the water to set off a new explosion.

The ensuing chain reaction could set off an explosion comparable to a gigantic atomic bomb.

Our experts studied the possibility and concluded that the explosion would have had a force of 3 to 5 megatons.

Minsk, which is 320 km from Chernobyl, would have been razed, and Europe rendered uninhabitable.

We had to stop the process. If it continued, it would have been an enormous disaster. An enormous nuclear disaster.

This second explosion would have been accompanied by a terrible shock wave and a massive rise in radioactivity that would have claimed thousands of lives in a matter of hours.

Thank God it didn't happen. There were trains with over a thousand cars in Minsk, Gomel and Kiev, ready to evacuate the population. The situation is critical. 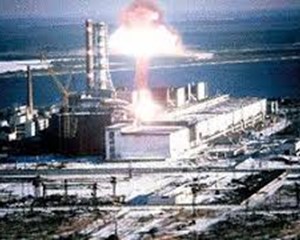 First, send in a batallion of firemen to drain the water from under the reactor.

They will later be declared national heroes, but will suffer from radiation sickness the rest of their lives.

Second: Seal the breach more effectively to bring the temperature down once and for all.

In two days, General Antochkin's men will drop 2400 tons of lead into the reactor.

When we started dumping lead in, the temperature went down right away.

It absorbed well and sealed the hole as it melted, so there was less radiation.

But some of this lead melts when it hits the blaze and vaporises into the atmosphere.

Twenty years later, traces of it can be found in the sick children of Chernobyl.

It's highly criticized today, but given the situation, there was no better solution.

And all the people - military or civilians, officers or not - worked selflessly.